5 geek craft projects to make your own

The best way to justify a day in front of Netflix is to be knitting/sewing/making while you do it. Instant ‘I’m being productive’ vibes, while you binge so many shows that the plots get confused. Were the clones in Orange Is the New Black, or Orphan Black? Was I just crying at Riverdale or the Vampire Diaries?

Bonus: make people stuff & they think you’re clever and creative. It’s quicker & cheaper to knit up a zombie hat than it is to attend university.

So, today I bring you the very best in knit & crochet fandom. You’re welcome ;-).

1. Knit your own Death Star

The one time you want holes in your knitting, or else how will the rebels get in?
This pattern from Nicole Kostelec is free on Ravelry, aka the best knitting site around.

2. Hook up with the Firefly crew

Behold the cuteness of Lucy Collin’s Firefly amigurumi! Why not buy the patterns from Etsy here, make all of them and send them to me. Please. I can crochet but I’m too lazy. I also love her Adventure Time cuties.

In the future, we won’t need Zoidberg costumes because the sea-levels will have risen and it’ll be ‘Evolve or Die’. Finally us humans will have our own tentacley crustacea thing going on. Til then, why not knit this Zoidberg balaclava and mittens? They’ll call you futuristic. They’ll be right.

4. Bring Your Own Brains

Pessimists among you may dispute my ‘in the future we’ll all have gills’ theory. Perhaps you think it more likely that a zombie plague will wipe us out before we get to evolve to Zoidberg heights. Knit yourself a zombie brraaiins hat and go to war against the zoidberg-balaclava people. Fight! Fight! Fight!

5. Dream with Doctor Who

Me, I’m a pacifist, more about the theorising than the fisticuffs, so I won’t get involved in the dispute. I’ll be at home, snuggled under my Doctor Who quilt. Night night. Sweet dreams.

By Rhian Bowley on in blog, reviews, tv

I keep trying to write a blog about how Buffy is responsible for at least 70% of my worldview, taste & a substantial number of my friends (I’ve never met a Buffy fan I didn’t like, & very few of my friends have escaped being forced to watch the show), but every time I start to do ‘research’ I just end up watching 12 episodes back to back & forgetting to eat. All I can say is, I have no doubt I’ll still be watching the show in another 20 years, and 20 years after that, too ❤ #grrargh

By Rhian Bowley on in blog, music, tv
Aw, another Season Finale! Already? What about my Damon fix?
***{Spoilers below the playlist}***

So, that was Season 5, huh? Well, I’m glad it was an improvement on season 4. No, I don’t give a crap about the travellers either, but I really didn’t give a crap about Silas. Immortal invulnerable baddy with no tragic/romantic backstory or hope of redemption = YAWN. At least Klaus had daddy issues and loneliness.

Oops, that turned into an anti-Silas rant. Sorry. No, I probably wouldn’t be complaining if there were two Ian Somerhalders on screen. And wasn’t Katherine amazing this time around? I’ll miss her, though I’ve already forgotten what happened to her mopey daughter.

Season 6 can’t come fast enough for me. I love the prospect of Alaric coming back (though given a choice I’d be 100% #TeamLexi) and all the new, angsty ways that Elena and Damon can be unrequited across the planes. 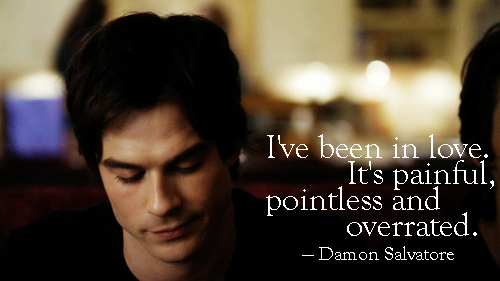 Nothing like belly-twistingly conflicted supernatural romance to get me tuning in. Speaking of, Staroline has been begging to happen for ages now so I do hope that comes to something next time. Ahem.

In the meantime, I’ve found a motherlode of Mystic Falls themed playlists on 8tracks, so I can get that gut-wrenching hormonal angst hey-i’m-17-again feeling triggered whenever I want.

All 8track playlists tagged with ‘Vampire Diaries’ should turn up in the player below. Click play if you want to spend the summer between seasons swooning like me…

In praise of Fringe’s wardrobe department

By Rhian Bowley on in tv, words 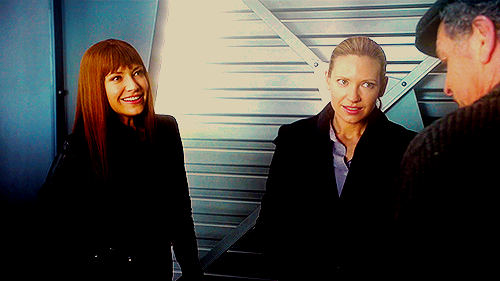 Spoiler status: this post is about Season 4, Episode 18. I don’t think it’s spoiler-y for anyone past episode 2 of this season but YMMV so, please, proceed with caution if you haven’t been watching recently.

There were a couple of moments that led to my favourite scene in this season’s Fringe. First, Walter packing a case to cross to the other side, even though he wasn’t meant to stay for more than a few hours –

[Olivia] Walter, you do realize that we’re just walking through a door.

Then, when the investigation did indeed involve staying for a few days, his acceptance of Faux-livia’s invitation to stay at her place –

[Walter]  I’d appreciate that, thank you. I shall refrain from sleeping naked.

These little moments led to the vision that was Walter, padding through the house in the middle of the night, dressed in a silky, glittery dressing gown which the wardrobe department should totally get a prize for.

You might assume it belongs to Olivia – it is certainly feminine, and he is staying in her house – but it fits him just fine, and he’s a man who’s middle belies his sweet tooth. I very much doubt that a gown belonging to buff Agent Dunham would cover enough of Walter to spare his decency. Or our eyes. No, I’m sure the gown is his, and he packed it himself, and it suits his character so wonderfully that I’m still thinking about it a few days later. It’s a genius detail that reflects something we love about Walter –  how he’ll always chooses pleasure over convention, and usually not realise there was any other choice to make.

I bet it’s a real thrill to be a wardrobe person and come across an item which is perfect for your character. How does it work? Do they get a budget to go shopping specifically for the cast, or do they keep an eye out when shopping for themselves? Like, they’re out buying ordinary things for themselves, maybe a vest or a new pair of jeans, when in the corner of their eye they see it – the perfect gown for brilliant, tragic Walter, or a sexy black jacket that cocky, futuristic Agent Lee would love. 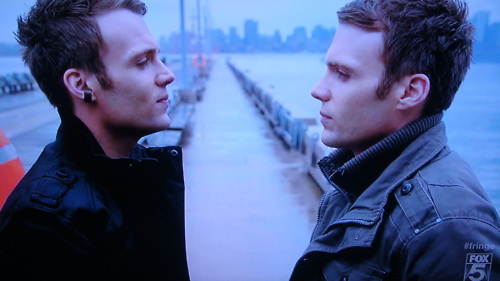 Comparing the doubles is one of my favourite things about this series – I’m always watching to see how the writers and wardrobe differentiate between the characters. It’s more than the ear-pieces that the alternates wear, or the blimps in the sky overhead. It’s more than the classic ‘Rebel wears hair gel, Nerd wears glasses’ trope, though that’s definitely in play. It’s their expressions, the way they walk, how they look at each other. Anna Torv has played at least three different women this season – all Olivia, all different enough that I reckon I could tell them apart just by listening to how they spoke. There must be something there I can steal and use in my writing. 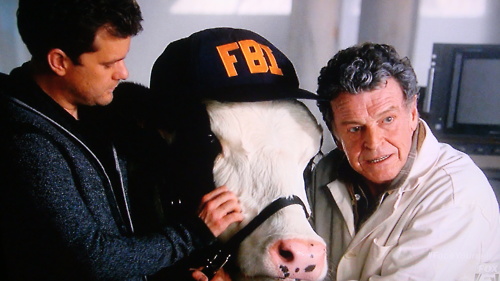 In many ways, Walter is the TV character I’d most like to be. He’s self indulgent, blasting his favourite music from stacked-up speakers with no care for the neighbours, eating whatever he craves, whenever he likes. He’s usually crammed full of psychedelic drugs, while either padding around naked or in slinky robes shot through with shimmer. He’s dearly loved and well respected, indulged by the government because he is a genius. He has a pet cow and he sees Joshua Jackson every day. All of these things would make me very happy indeed.